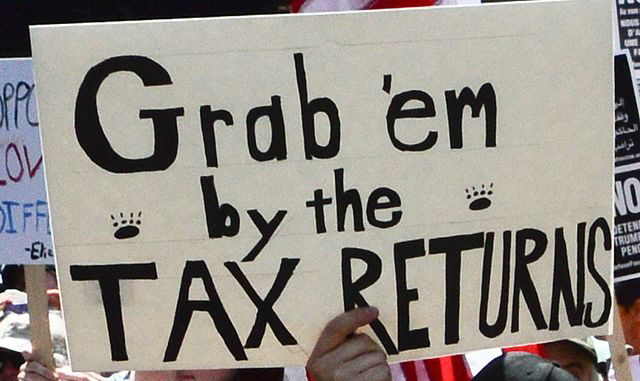 Short of every state passing legislation to force Trump to hand over his 1040s, it is doubtful the public will ever see his tax returns. (Credit: Ben Alexander) CC BY-SA 2.0

There was a time when failing to follow political conventions meant an end to your career. Not in the world of President Pennywise, where even the worst scandals might result in your reelection. Trump's failure to follow 40 years of tradition has prompted at least one state to force him to behave in the manner expected.

California's state legislature has passed a law that any candidate wanting to appear on the ballot in 2020 must release the previous five year's tax returns. Adding a whole other layer of strangeness, the bill must be signed by Gov. Jerry Brown who refused to release his own taxes, a first in three decades. The state is key for presidential elections as it carries 55 electoral votes out of 270 needed to win.

The GOP has blocked previous attempts to make Trump's taxes public, because of course they would.

This past February, Rep. Bill Pascrell Jr. (D-NJ), a member of the Way and Means Committee â” the chief tax-writing body of the House of Representatives, called upon Chairman Kevin Brady (R-TX) to submit a formal request to the Treasury to release the returns for the past decade. The move is within the scope and power of the body after a 1925 law following the Teapot Dome Scandal, which allows the committee to review taxes in a closed session and make a determination whether to publish the information.

The Presidential campaign is over and the fear that a political opponent will try to use tax returns for electoral benefit is passed. President Trump is now governing while also owning a business with international investments. The Constitution faces unprecedented threats due to this arrangement. I believe the powerful Ways and Means Committee has the responsibility to use that power to ensure proper oversight of the executive branch by requesting a review of President Trump's tax returns.

Despite a White House petition with over 1 million signatures, it seems that the public will be unable to compel the release of the documents without other states following suit.