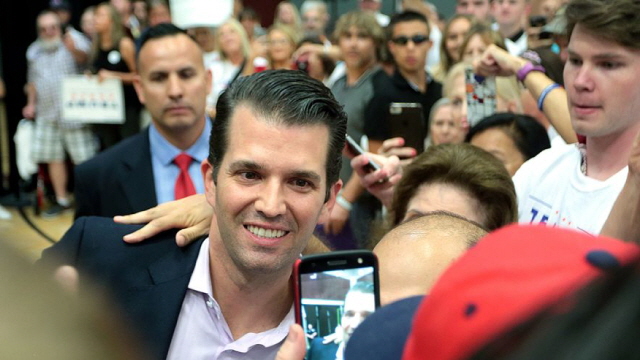 How stupid is the Trump Family? Junior has been this close to Trump supporters and he wants to decline Secret Service protection. (Credit: Gage Skidmore) CC BY-SA 2.0

Donald ”Uday” Trump, Jr. has declined Secret Service protection amid claims that he has growing privacy concerns. Junior lives in New York City with his wife Vanessa and their five children, and has expressed a special interest in meeting with Russian operatives posing as adoption attorneys, which no doubt can be problematic with government agents in tow.

The agency has not confirmed the reports, however, the Orange Supremacist's eldest son refused protection when he recently traveled aboard a yacht in the Bahamas.

To ensure the safety and security of our protectees and their families, we will not confirm who is currently receiving Secret Service protection.

Reportedly, the agency was none too thrilled about the Bahamas excursion.

The Secret Service sought an additional $60 million to be added to its budget for 2018; the funds earmarked to cover the Trump family in New York as well as travel costs. The agency has not disclosed how much it spent on equipment and infrastructure to secure Trump Tower on Fifth Avenue.

Trump has been vocal about Barack Obama’s travel expenses claiming that the cost to taxpayers in the millions of dollars was “unbelievable” At a campaign rally last year, Trump said,

There's no time for vacations. We're not going to be big on vacations. The White House is this incredible place. It represents so much, and you're there for a limited period of time. If you're at the White House and you have so much work to do, why do you fly? Why do you leave so much?