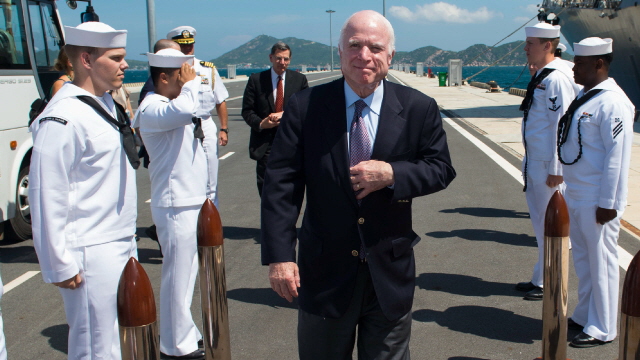 There's no doubt that Sen. McCain is a respected leader. The question is whether his censure of Trump is enough to right the Republican ship. (Credit: U.S. Navy photo by Mass Communication Specialist 3rd Class Joshua Mortensen) Public Domain

With a fervent plea to return to normalcy in Congress, Sen. John McCain (R-AZ) blasted Donald Trump in an op-ed, labeling him inexperienced and poorly informed, in addition to having problems controlling his impulses. While we must give props to McCain for going on the record with what has been painfully obvious to everyone else, one must question why it took so long in spite of the often horrifying and outrageous behavior coming from his anointed leader — before he even took office.

That has never been truer than today, when Congress must govern with a president who has no experience of public office, is often poorly informed and can be impulsive in his speech and conduct.

The elder statesman and former presidential candidate has grown increasingly critical of the current administration, particularly following McCain’s disclosure that he was battling brain cancer. And perhaps this makes him the likely candidate to be appointed mouthpiece of the party, as his current health crisis makes him pretty much immune to criticism or attack. Unless, of course, you’re Donald Trump, who has shown a stunning lack of understanding for common courtesy.

The piece seems to be an attempt to officially distance the GOP party from the toxic poison oozing from the White House, while dishing out harsh criticism regarding the perpetual drama and unrelenting march off a cliff in a quest to realize their flawed conservative agenda.

Congress will return from recess next week facing continued gridlock as we lurch from one self-created crisis to another. We are proving inadequate not only to our most difficult problems but also to routine duties. Our national political campaigns never stop. We seem convinced that majorities exist to impose their will with few concessions and that minorities exist to prevent the party in power from doing anything important.

Whether the 80-year-old senator was speaking on behalf of the entire GOP is unclear. But what was apparent is that the “maverick” has embraced the need for collaboration and compromise in Washington, and is at least paying lip service to the idea of reaching across the aisle to find workable solutions to the many legislative failures of the Republican controlled House and Senate.

We must respect his authority and constitutional responsibilities. We must, where we can, cooperate with him. But we are not his subordinates. We don’t answer to him. We answer to the American people. We must be diligent in discharging our responsibility to serve as a check on his power. And we should value our identity as members of Congress more than our partisan affiliation.

Someone in the Republican National Committee must have woken up to the idea that they are going to be pummeled in the midterms and this was their concession to suck in the moderates and Independents.

This was too little, too late, McCain.