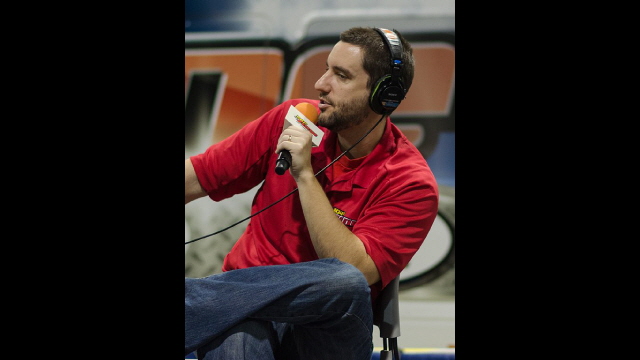 Clay Travis is proof that even assholes get their 15 minutes of fame. (Credit: Latics) CC BY-SA 4.0

In the heart of Trumpistan USSA, no inappropriate and vulgar thing you say on serious news show, recorded and replayed ad infinitum, can get you fired. No matter how hypocritical your statements may be, you’re safe.

Case in point, Fox Sports Radio host Clay Travis being interviewed by a female news anchor, Brooke Baldwin, while arguing why a black female anchor, Jemele Hill, should be fired for speaking her opinion, says he likes the First Amendment and “boobs”. So many things to unpack here.

Fox Sports claimed he has not worked there for six months. Hereâ™s what he wrote for Outkick the   Coverage:

I don't believe Jemele Hill should be fired for tweeting Donald Trump was a white supremacist and for recently saying police officers are modern-day slave catchers. I also don't believe Curt Schilling should have been fired for what he said about the North Carolina transgender bathroom law or any of the other conservative political positions he's adopted over the years. That's because I’m a First Amendment absolutis t-- the only two things I 100 percent believe in are the First Amendment and boobs -- who is also capable of doing something that most in modern media seem incapable of -- distinguishing between a person’s public job and their private political beliefs. (Which are also public thanks to modern-day social media.)

Remember, this is a nation that elected a man who said, on tape:

I did try and fuck her. She was married.

I moved on her like a bitch. But I couldn't get there. And she was married. Then all of a sudden I see her, she’s now got the big phony tits and everything. She’s totally changed her look.

You know, I’m automatically attracted to beautiful -- I just start kissing them. It's like a magnet. Just kiss. I don't even wait. And when you’re a star, they let you do it. You can do anything.

Grab ‘em by the pussy. You can do anything.

It is not that what Travis said was so shocking, it’s the complete disregard for social norms and appropriateness of the subject matter for the audience. Since the Orange Supremacist has taken office, it’s as if someone unleashed every unholy urge and uncontrolled impulse of every attention deficit douchebag with a microphone in his face.