Chief of Staff Kelly is blocking Omarosa and Trump Loyalists 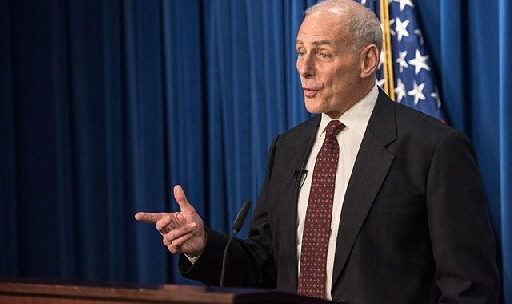 White House Chief of Staff John Kelly appears to know that the So-Called President is easily led, and he’s begun to take steps to enforcing “normal” in the White House. Well, as normal as you can get in this circus car full of clowns.

The retired Marine general's first move was to block long time confidante Omarosa Manigualt, communications director for the Office of Public Liaison, who is fond of wandering into meetings uninvited. Manigualt will no longer be feeding the Covfefe-in-Chief unvetted and questionable news sources — no doubt to prevent the Orange One from making embarrassing policy reversals that would have to be retracted later. Manigualt has long been recognized as the biggest offender for triggering a Trump twitter tirade.

Kelly’s long time aide Kirstjen Nielsen followed him from the Department of Homeland Security and has been appointed an assistant to the president, bringing no-nonsense enforcement to day-to-day operations. In short, her role is the gatekeeper to the gatekeeper. Taking up residence in Steve Bannon’s old office, Nielsen cancels meetings if an attendee is late, doesn't always return phone calls, and is the agent of change among an undisciplined group of spoiled children. Some Trump loyalists in the West Wing have compared her to “Nurse Ratchet”, a cold-hearted head nurse in a mental institution from the movie, “One Flew Over the Cuckoo's Nest.”

At Homeland, she actively ensured that no Trump supporters were appointed or hired. Like [national security adviser H.R.] McMaster and Kelly, she is a neocon who likely did not vote for Donald Trump and certainly does not support his non-interventionist worldview. If the president fails, it will be because of appointments like this. Roger Stone, Trump Adviser That No One Takes Seriously

The shakeup at the White House is getting ugly and it looks like Kelly is bringing in reinforcements. The question is whether he has enough fire power to overthrow the inflammatory devices from the likes of advisers such as Kellyanne Conway, Omarosa Manigualt, Hope Hicks, and the biggest offenders, the Trump family themselves.